A pair of endings.

The first one, what with it being the 28th of Feb, is the last post of the Blogathon 2021. Not sure how we made it through with such a lack of activity but we did.

The second is another step away from work and into retirement. I have cleared out and cleaned my van, which will be returned to the company we have leased it off, first thing tomorrow morning. It feels like a very significant step but once more, perhaps being made worse by the times we live in. It's not the giving up work that is getting at me but a sort of loss of freedom I suspect. Who knows.

A few years back I kept going with daily posts until mid May, perhaps even the end of May. I'll not be doing that this year.

The contents of my wallet are presently;

I may have mentioned previously that I have the manual dexterity of a retarded wombat but I had an overwhelming desire to join in with Grayson Perry's Art Club 2nd series. I didn't watch the first one so I'm not really sure why. I quite like Grayson because he seems really grounded.

So I started watching and then realised that you needed to know what subjects were coming up. A quick search revealed the five following subjects from tonights episode.

Which is when I discovered the next two subjects were already closed so no doing those ones if you can't send them in.

Having made a note of the last three subjects I thought I'd read about sending stuff in.

Which is when I discovered it is only for people in the UK and Eire.

I got a new phone today. We had to reduce the mobile contract I was on from extortionately expensive to something reasonable. Because we had an all singing and dancing package when we were working, which meant having calls to everyone in the world, it was costing a frog's leg short of €90 a month. Thankfully we have got it down to €19.99 a month. Unfortunately, because it is a change to an existing contract there was no phone with it and I was using a substitute phone as I'd broken the original and the present one was dying on it's feet, or mainly on it's screen upon which I drop it with regularity.

I was just sighing with resignation when TMM asked whether she was due an upgrade. Indeed she was, so she enquired whether I could have it instead. And they agreed! Huzzah.

I couldn't get what I would really like, the latest Samsung, S20? because although an upgrade we had to pay for a proportion of the cost and that was still astronomical, but for just a €1 coin I was able to get the latest A42 release. It has four llenses on the back which may or may not be good. I'll know when I take a photo, but what is better, is it ships with 128gb storage. I am faint with excitement. The phone it replaced had 16gb and I only had 600mb spare. I listen to downloaded audiobooks on it so I had to delete one to get the next one on. Now I can store a virtual library on there.

Until I start apping it up. Which reminds me, I need to get the geocaching one on there.

When Mum stayed with us during lockdown, to break up the monotony of only having knitting and puzzles to do she went back to reading which she had given up a few years before because of cataracts. Having had her eyes done she realised this line of pleasure had been reopened to her. We had some romance stories, her preferred genre, and she got through a few before a window opened to get her back home. Since then, I have been picking up books for her on Amazon and getting them delivered. She has worked her way through the three books that Anton du Beke has written, he of Strictly Come Dancing fame, And yes, they do revolve around ballroom dancing.

Next, I have got her some some books by Nadine Dorries. Romances set in Ireland and Liverpool. And she has just about finished them. So we were discussing whether she wants more books by Nadine or whether she fancies a different author. Although it took her virtually half the first book to get into the writing style she says she has enjoyed them and she is happy to have more of hers. And then she told me they are a bit racy. I advised her that maybe she should shut her eyes and not read those bits.

"You must be joking" she said, "I'm learning all sorts of stuff I didn't know".

As long as she doesn't ask me any questions!!!!

Just as there are bad days, there are good days too. Today is one of the latter.

The Magnificent M went to see the doctor this morning for a repeat prescription. So, as we do every time one of us sees him, she asked what news of the vaccine. We are on his list. For the next two weeks he only gets 10 doses a week and after that it is 30 per week. He is duty bound to vaccinate the most vulnerable first but a) he thinks we will have had our first jag by end March and therefore the second by end April. This means we could be in a good position to get into the UK when the borders open depending on what rules there are. He also has us on his emergency list so if people don't turn up we might get called to come straight in.

Next up was that we both got an email to say we have our appointments to get our Carte de Sejour, the all valuable Right to Stay. This is in mid-April. They have accepted the forms we have sent them with the supporting evidence that prove we have lived in France for 5 years +. So all we have to do is take our passports, a typical passport sized photo, the email they have sent, and once they have seen those they should issue a card. All this is free from what we understand. Unlike the renewing of my passport which will wait for another day's scribblings. So again that would make travel easier if we can leave the country in May onwards. The other good thing about this, for us, is that it is one more physical sign of our integration into French living. Unlike many British who are scared stiff of identification cards, (whilst complaining about it on their mobile phones which are never more than a foot away from them), the French don't mind them. They make everything run much more smoothly. We will not be able to get the National Identification Card unless we take French Nationality. Which we probably won't, mainly for practical reasons should we wish to go back to live our final years "back home", although it feels less and less like somewhere we would think of as home with every year that passes.

So, if I was to get a dog, and it's a big if, particularly as The Magnificent M says we aren't having one. what would I get. I might actually like to have one and I did of course put my foot down, but not until she left the room obviously.

I know I want a dog and not a glorified hairy rat. So no yorkshire terrier or chihuahua for me!

I'm perfectly safe in my masculinity so I don't need a macho dog, like a Rottweiler, bull terrier or bulldog.

Nor are we made ofmoney so the feeding costs mean Great Danes, St Bernards and other oversize dogs are out.

In fact I probably only have three dogs I would consider.

In third :  In reality I probably would rule this out but I love Bedlington Terriers. But in the end I think it's probably not quite "dog" enough even though I love the look of them.

Second : This is my runner up and may in the end be the winner. Of course, they are as mad as a sack of monkeys, but a cocker spaniel appeals greatly. A friend in the past had one and so does a friend now. Both completely mad. But loveable and a bundle of fun.

The Winner : Firstly, I think it is a good size for a dog. Secondly, they always appear to be grinning. Thirdly, I was born in the area they are named after.  It's one of these. An Airedale Terrier! 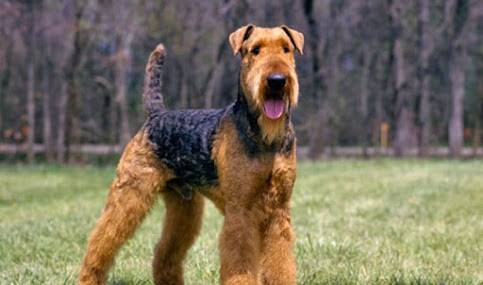 kennamatic
I now live in the South of France, the proper South, not the Nice/Cannes bit which is three hours north. It's a strange place to end up living when all you brought was a failed French o'level and an allergy to cheese. But it is home, and I love it.